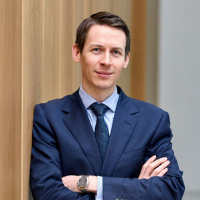 Rob is the General Counsel and Company Secretary of The Crown Estate – a UK real estate business which manages a £14bn portfolio; including commercial property in London’s West End, retail across the country, and most of the UK seabed.  A former City lawyer, Rob is the strategic lead for legal, knowledge, information security, privacy and governance at The Crown Estate.

Rob is a vocal advocate for innovation, progress and change, and has been heavily involved in reshaping his organisation and function.  Rob is a Co-Founder of The Bionic Lawyer Project and also supports and leads a number of initiatives that seek to promote equality and diversity of thought – including sitting on the Advisory Boards of a number of influential industry bodies.  In pushing boundaries, Rob has been recognised repeatedly as an innovator, including being listed by the FT on its GC Global 25.