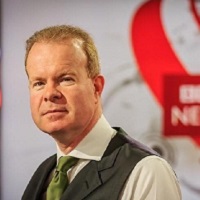 Joe Lynam is a respected broadcaster and journalist who presents The Newsroom on the BBC World Service and Radio 4. He was the BBC’s senior Business Correspondent until 2018.
He has branched out into webcasting, book launches, webinars and all manner of real world and virtual events
Joe won many awards for his original journalism including the 2018 Headline Money Award for his BBC One expose of how RBS destroyed many of its own small business customers. Joe was also the first to broadcast on Radio 4 phone fraud (Vishing) as an elderly lady unwittingly handed over thousands of pounds to fraudsters. For that he won the Wincott prize for Journalism in 2016.
Joe has travelled the world with the BBC covering the financial crisis (2007-2010), followed by the Eurozone crisis (2010-2013) and more recently the economic and political fallout of the Brexit referendum.
He has presented on the Today programme, Newsnight, BBC One Breakfast as well as Five Live, World Service and the Andrew Marr Show.